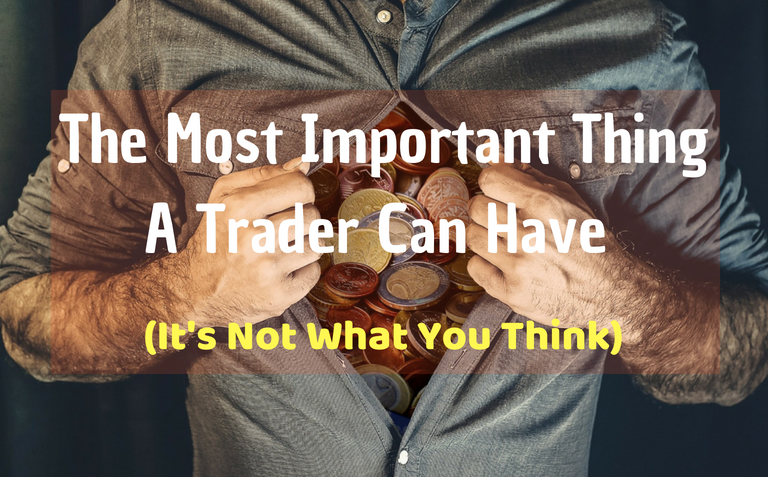 In today’s post, I’m going to talk about the single most important thing you need in your life if you want to be successful, in and out of the market.

But first, try to guess what that might be…

Well… it’s certainly better to navigate life with some decent amount of money just as it is to trade the market with a better-funded account. It puts the odds of success on your side because trading mistakes, slippage cost, commissions, drawdowns, all these things are magnified in smaller accounts.

But, even though opportunities are more present when you have money and risk tends to be is more linear with a bigger trading account, we’ve all heard the stories of how people blew up millions of dollars overnight.

Hence, money, while certainly important, isn’t the most important thing you can have.

… what about passion then?

Passion surely is critical in life. I can’t imagine trading for a living without the passion that I feel for it. But even passion is one way or another other dependent upon that “single most important thing” that I’m calling your attention to.

… ok, let’s try a third answer: Is it discipline?

Oh! It must be this, right? We hear it all the time: discipline is THE master quality you need.

But again, without the ‘thing’ I will tell you about, there would be little discipline.

the most important thing you can have is…

Often beliefs and values are gathered together and are treated as one subject, but the way I see it, there’s a slight technical difference and it is useful to articulate it.

So, to reiterate, good values are more important than money, passion, and discipline. This is very hard for a lot of people to comprehend and accept because we live in a world where people are led to believe that money is everything. Or that passion is everything. But that isn’t quite so.

Let me clarify with an example…

John often feels like eating junk food. It’s tasty, so he likes the feeling he gets when he eats that kind of food. He believes that it’s cheap for what it is. But he also believes that junk food is linked to health problems of all sort.

So what is it that stops John from eating the food that he wants to eat?

The answer is his values! John may hold values like commitment, discipline, etc., but above all, he values his health.

In other words, very often there is a necessary battle that occurs inside most of us: What we feel like doing (based on our beliefs) is in direct conflict with the values we hold.

In general, we’ll feel positive emotions when our values are acknowledged and fulfilled. However, when they are violated in some ways, we’ll feel a plethora of discomforts – physical and emotional.

Here’s another example that will make you think…

John values accuracy, commitment, freedom, openness, self-reliance, and consistency. He has a trade on, with open profits, which he intends to trail for maximum profits. Since the market is trending ferociously in the direction of his trade, this is clearly the right thing to do.

Here, John’s beliefs and values are in direct conflict with one another. He values openness, freedom, commitment,… yet fears failure.

Do you see where I’m going with this?

John holds certain beliefs and values that are very useful in the project of success in trading, but he also holds others that aren’t. So he’s often conflicted.

Almost everything that is wrong with struggling traders comes from them either not having good values that are conducive to success in the markets, or not living by them because they haven’t identified them, or they feel they want to do something else based on some other belief(s).

It’s a total misalignment between beliefs and values.

Traders who struggle in the markets do what they feel for the sake of short term emotional gratification, rather than live by the value of doing what they know they should do for the sake of their long-term results.

I know this as a matter of personal experience.

In my humble opinion, this is the reason why the failure rate is so high in this business.

the sky is not the limit. Our limiting beliefs are!

The best traders out there – the consistently profitable ones – are people who hold values that are in line with the way markets are designed to make consistent profits available for them. And trade after trade, they choose to act on those values instead of their short-term feelings.

In life, when the things that you do and the way you behave match your values, life is usually good – you’re satisfied and content. But when the things you do don’t align with your personal values, that’s when things feel… wrong. This can be a real source of unfulfillment.

For example, as a trader, if you value accuracy, commitment, freedom, openness, self-reliance, consistency, but then, you deviate from your trading plan, you’ll likely experience the feeling of regret. Possibly guilt. Because you didn’t live up to your values – and following your plan was a way to express your values.

On the other hand, if you did follow your plan, you’d feel good, because your values would be honored.

This is why making a conscious effort to identify your values is so important.

(Just to name a few)

You don’t have to identify each and every single one of your values, just the main ones that are required for you to succeed as a trader. Identifying your values allows you to know what is important for you and what course of action is likely to make you feel good about yourself.

The way I see it, when we make belief-based decisions, we’re, in fact, using all our past experiences and what we’ve learned to make a decision.

This might sound like a good thing, but we’re only perpetuating what we believe, which may not be the truth, or effective, or appropriate. We’re perpetuating ways of making decisions based on the past, not based on what it is that we would like to create in the market.

On the other hand, value-based decision making allows us to sever the link to the past (if it’s appropriate) and then make a decision based on what it is that we want to experience in the future — in the case of trading, the gift of consistent profitability.

In other words, value-based decision making is what it is that you want to consciously act out and create rather than subconsciously act out and create. Because sometimes a lot of our belief-based decision making have fear-based reactions attached to them in a subconscious way, so we’re actually just perpetuating old patterns that don’t serve us well anymore.

So that is it… Values: The most important thing a trader can have.

Value-based decision making allows us to build a gap between the past and the future so that we consciously create the future that we want to have happen.

So identify what you value and then make your best effort day after day to live by those values.