How to Trade Fearlessly – A Simple Guide 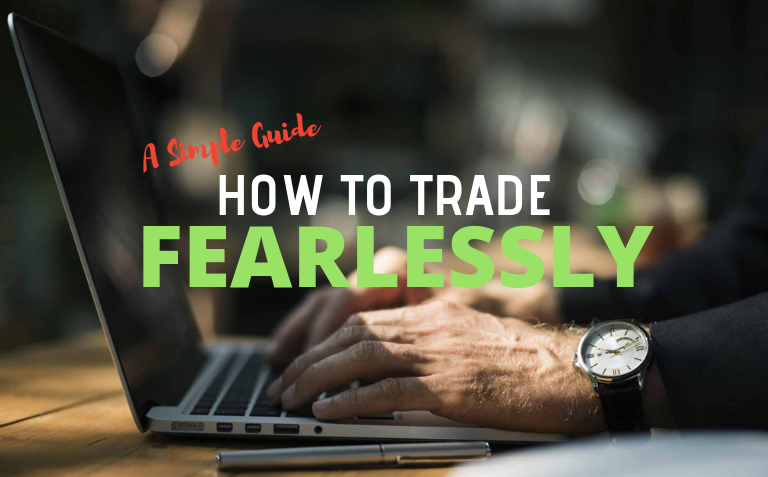 This blog post will teach you how to face your fears. By the end of it, you will learn how exposure therapy can help you face the very situations you fear so that you can eventually desensitize yourself and get over your fears for a much smoother (and profitable) trading experience.

How to Trade Fearlessly – A Simple Guide

Then, one needs not be a genius to understand that fear is driving your behavior.

Now, the best way to get over any fear is to simply face it.

That’s right. If you keep trying to avoid the object of your fear, you will keep fuelling the very fear that you’re trying so hard to get rid of.

Fear arises because of some painful past experiences. Yes, most of the time, it’s learned.

Whether you formed the fear in a trading context or not, the fact is that you have unconsciously developed a habit of ‘running away’ from any situation that would make you experience such pain again.

The problem in trading is that you can’t keep reinforcing the habit of running away from what makes you fearful. If you do, you’ll never get to a place of mastery and consistent profitability.

So fear needs to be dealt with, and one of the best ways to do so is via exposure therapy.

What is Exposure therapy?

Exposure therapy is a process by which you get to desensitize yourself to the situations that make you fearful by repeated and gradual exposure.

The first step in the process of desensitizing yourself would be to get used to seeing images of spiders. If that’s too much for you, then it can be useful to make those cartoon images instead of images of real spiders.

Once you get used to that, then the second step could be to get used to seeing images of real spiders.

Third step could be to get comfortable observing spiders from a distance.

Seventh step: Now you’re at a point where a spider could be in your personal zone and you wouldn’t freak out.

The eighth and final step in this situation would be to touch a spider and eventually let it crawl on you. At this stage, your fear would be gone because you’ve been through a slow and gradual process of desensitization.

So that’s the point.

Again, the goal is of exposure therapy is desensitization. This implies:

A fear goes hand in hand with a situation when that situation is associated with danger, whether it’s real or not. When you desensitize yourself, the situation is normalized. It ceases to destabilize you on an emotional level.

It’s a process, not a quick fix.

When implementing this desensitization technique, it’s important to be patient. Some people will get over their fears fairly quickly while it might take others more time. It will depend on how strong the fear is and, of course, other psychological factors.

Also, in general, 8 to 12 steps are sufficient, but it can go up to 20, or even more. It all depends on the situation.

But it is not recommended that you do less than 8 steps since evidence suggests that it’s not enough to guarantee the efficacy of the exposure therapy.

It must be a slow, gradual process.

Exposure therapy is heavily backed by science, but it’s not as if this is new stuff. People have known the technique for thousands of years. This is how the bravest of early humans taught their kin not to fear woolly mammoths and to, instead, view them as lunch.

Nowadays, this is how we teach our kids not to fear clowns, dogs, their first day of school, or what have you. We keep introducing them to the things that make them fearful.

How can Exposure Therapy help me in trading?

Because real money is involved, the fear of loss often underlies most of what the new or struggling trader does.

When it’s a program running mindlessly in the background, it is one of the main causes of trading errors.

So to weaken the fear of loss, here’s a 9-steps process that can be broken down into two parts.

Since fear is exclusively a mind phenomenon (it’s an inner experience), it is first useful to visualize the situation that makes your fear flare up, before putting yourself in that situation in the real world.

Let’s say, you hesitate to pull the trigger on trades.

Let’s work with that and let’s see how that visualization process would look like.

(Sit comfortably where you are. Close your eyes.)

See yourself as a patient and calm trader.

Step 2: If some fear arises in the mind, let it do so.

Let feelings and emotions arise without pushing them away. Let yourself experience them from a place of acceptance.

Understand what it’s trying to accomplish and why you should follow it. Then, visualize a position size for that trade that you would be comfortable with, that would help you maintain emotional stability.

Step 4: See yourself pulling the trigger at the right moment on that trade.

The uncomfortable feelings and emotions are likely still there, but you’re pulling the trigger in spite of that.

Visualize the market moving in your favour initially but then, against you, hitting your stop-loss.

Step 6: Let yourself feel the disappointment.

It’s a very short exercise that I recommend you do every day before the market opens.

This simple technique dates back many thousands of years and was used by Stoic philosophers Epictetus, Seneca, and Marcus Aurelius, just to name the main ones.

The idea is simple: When you prepare yourself for the worst, you are in a better place to deal with it when it does happen.

Over time, the technique will help you:

So this is the next set of steps as you work towards de-energizing your fears.

It is important to track your trading strategy’s performance to know what it’s capable of and its drawbacks in live trading. That’s the first purpose of a holding a journal. But journaling also gives you tremendous information about yourself – it helps you improve your psychological game.

If you make a specific fear-based mistake and write it down, you can look at it and say where you went wrong. And this directs you towards what is right.

When you look at your records, it’s a very powerful visual of what your performance would look like without trading errors, if you could just execute consistently according to your plan.

I’ve tracked every single trade I took in my entire career. If you were to ask me what I traded on a certain date, I can pull it up, tell you the exact thought process behind it, what I did right, what I did wrong, how the trade turned out and how I felt before, during, and after that trade.

Tracking my trades has allowed me to dramatically cut my learning curve and make continuous progress towards achieving my goals, trade after trade. And if you don’t do it, you will tread water. Without a doubt!

You will have to play with that and determine your threshold – a point where you feel relaxed and can calmly focus on implementing your proven process, as opposed to feeling agitated and being too outcome-oriented.

For some, this might mean that you’ll need to reduce your size to a point where your profits are just enough to pay commissions. If that’s what it takes, that’s fine.

As said earlier, it will depend on how strong the fear of loss is.

But always keep this in mind: Focus on developing skills instead of making money!

This is very important, and, quite frankly, it’s a simple concept to grasp, yet most people choose to ignore it.

Money — and our lust for it — has a way to get to our head like nothing else.

But trading is like anything else. It requires skills.

For instance, you gotta learn to play guitar before you decide to play live in front of an audience. You need skills. But that isn’t going to come overnight. There’s a process to it. You have to break down the moves you want to learn; you have to study them, and practice them carefully.

And when you’re finally playing at a professional level — after hours of dedication, immersion, practice, compromises and often pain — you have to start playing in front of a small audience to develop confidence and get over stage fright. And that too isn’t going to come overnight.

It’s the exact same thing with trading. Trading small will allow you to make mistakes and learn without major financial (and emotional) consequences. Over time, as you feel confident trading a certain size, you can slowly increase it. That’s right, trading money is the slowest fast money you’ll ever make.

In other words, the more you take the trades your system identifies, the more likely you are of being at the right place and at the right time. You are not nitpicking anymore – you are there, available and ready!

2. It helps you tame your fear of loss.

When you trade often, you will get losses, and so, you’ll get to understand their inevitability. And, all of a sudden, they won’t seem that scary anymore. All of a sudden, it’ll organize your thinking, your body will relax, your behavior will get more consistent. And then, you’ll begin the process of refining your execution, and refining and refining…

So, in a nutshell, this is how exposure therapy works in a trading context.

When your brain senses danger, it triggers an immediate response, the so-called “Fight or Flight” mode.

These days, though, it’s not the things that want to eat us that our minds worry about. Instead, it’s not making enough money, being rejected, not being able to pay the bills, embarrassing ourselves, or any of a million and one other common worries.

That’s why an endeavor like trading is so hard. It requires us to get a little bit more control over our minds.

And that’s where exposure therapy comes in. Exposing yourself to what you fear will make sure that the fight or flight response will eventually subside and leave you. Exposure Therapy enables you to retrain your brain so that you can start approaching the market with calm and confidence for a much more profitable trading experience.