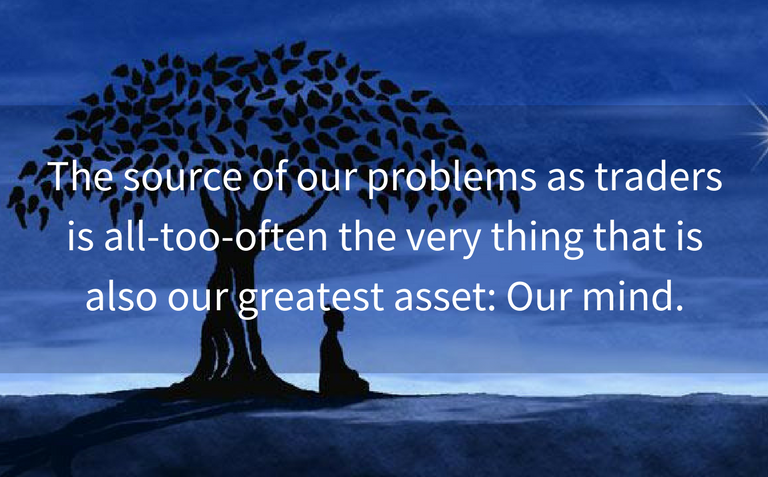 Suppose I tell you about a magic pill that you could take daily. That magic pill could drastically increase your ability to take rational decisions in the markets; it could reduce your anxiety when you trade; decrease impulsivity, and increase your overall capacity to act in your best interest in the markets…

Would you take such a pill?

Suppose, finally, that the pill is all natural, but that is not all: It costs absolutely nothing… the only caveat is that you just have to be willing to take it every… single… day!

Now would you still take it? That pill exists – it’s called meditation.

The habit of *mindfulness* meditation is hands down the most powerful thing I have ever learned. If I had to attribute my success in the markets to a habit that I do consistently in my day-to-day life, without a single ounce of hesitation I would say meditation.

The source of our problems as traders is all-too-often the very thing that is also our greatest asset: Our mind. Taking a trade too soon; taking it too late; not taking a signal at all; not putting a stop in; moving our stop; not taking profits, or taking too little of it, all these trading errors result from our thoughts. In fact, as a species, most of our dissatisfactions, worries, and pain are engineered by our thoughts. The good news is that we can learn to change our relationship with those states of the mind.

Mindfulness meditation is an incredible practice that comes from a 2,500-year-old tradition of using an anchor like the breath to first stabilize attention, bring awareness to the present moment, cut through this constant association with our thoughts and feelings, and develop insight.

The thing that got me to open my mind just a crack [about the practice] was hearing about the science.

But I have to admit, I was incredibly skeptical about it at first. Not only was I skeptical about anything bordering on the metaphysical, which I assumed mindfulness involved, but I also thought that it was strictly reserved for monks, ascetics, and other contemplatives.

The thing that got me to open my mind just a crack was hearing about the science, and I think that is true for a lot of people who have given it a try of late. Naturally, one hears about those extraordinary things mindfulness does to the brain and the body, and quickly it becomes all compelling. For me, it seemed like the practice could provide some kind of answer to my recurring problem-behaviors in trading, so I tried it. And it did!

But I have to say, my first taste of it was miserable! I had set an alarm for forty minutes (not a very good idea if you are just starting out) and had a full-on collision with the zoo that is my mind. It was really hard to stay focused more than 5 seconds on my breath and, at the end of that painful session, I got even more frustrated.

We spend our lives lost in thoughts.

I reflexively thought that my mind was somehow busier than everyone else’s and that I couldn’t possibly tame it. Intrinsically, the realization that I was lost in thought 99% of the time didn’t hit me as something that was deeply perplexing. What bothered me the most was that I thought meditation was a complete waste of my time.

We spend our lives lost in thoughts. That is the natural tendency of the mind. It ruminates; it jumps from thought to thought incessantly, from morning till night, from birth till death, giving us no rest for a moment. Most of these thoughts are not exactly invited, they just appear in consciousness, occupy our attention for a while, and then disappear, making place for others.

The question is, what should we make of this fact? In the west, for a very long time, the answer has been “Not much.” In the east, especially in contemplative traditions like those of Buddhism, being distracted by thoughts is understood to be the very cause of human suffering.

In the Buddhist belief system, Siddhartha Gautama (the Buddha) is said to have attained enlightenment under the Bodhi Tree where he had been sitting in a meditative state for weeks. Soon after his enlightenment, he passed a man on the road who was struck by his extraordinary radiance and peaceful presence.

The word “Buddha” means one who is awake. To my knowledge, Siddhartha Gautama wasn’t some kind of deity or superhuman, although a lot of the beliefs attribute to him superpowers or a deistic nature. What most scholars agree upon is that he was just a human being who went on a quest to find the meaning of suffering – and he found his answers through this specific contemplative practice.

The practice of mindfulness does not ask us to become a Buddhist or a religious person. That is not the point here. Rather it invites us to fulfill the capacity we each have as humans to awaken – from this dream-like state we seem to all unconsciously be prisoners of…

We spend our lives feeling identical to our thoughts. It doesn’t matter if your mind is wandering over why the markets did what they did; the latest celebrity gossips, or what you had for lunch today, if you are thinking without knowing that you are thinking, that is what it feels to be identical to thoughts.

The problem is not thoughts themselves but the state of thinking without being fully aware that we are thinking.

Thoughts are important. They are part and parcel of the human condition. Our ability to think is at the very core of our evolution as a species. Our thoughts gave birth to arts, literature, science, philosophy, and so on. So clearly, the problem is not thoughts themselves but the state of thinking without being fully aware that we are thinking – and that very state is the cause of all our woes despite our capabilities as humans.

And it is the reason why success in the markets appears so elusive; so close yet out of reach. Thoughts drive your behaviors, emotions, and determine your future expression in the markets.

In essence, what I am stating is that you have to learn to use your mind in a way that engenders a greater degree of satisfaction and well-being. We enjoy real freedom only when we are able to still our minds – even for a few moments at a time. But disrupting the flow of thoughts might look like an infeasible feat; however, meditation can eventually lead you there.

With practice you can learn to separate yourself from your thoughts and feelings, resulting in a complete change of dynamics in the kind of relationship you have with them, which then inevitably leads to a better appreciation of the present moment and a drastic reduction of your inherent psychopathologies.

Available on Amazon for USD 2.99