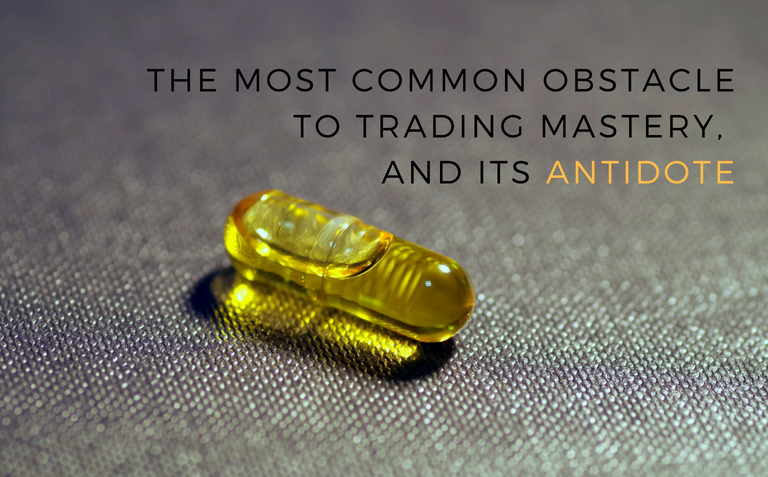 Impatience is one of the most common forms of resistance to the practice of good trading.

In a way, it represents your mind’s attempts to hold on, to solve a problem where there is none, thereby creating one in that process.

[Tweet “The Most Common Obstacle To Trading Mastery, And Its Antidote”]

In trading, patience is not just a virtue. It’s gold! Sometimes you can accomplish the most by doing nothing. And slowing down and doing nothing can be quite an uncomfortable experience.

The physical discomforts that accompany impatience are natural withdrawal symptoms from stimulation-addiction and excessive goal-oriented thinking.

And those symptoms (from being busy, being stimulated, planning and worrying) are very similar to the withdrawal symptoms one experiences when giving up coffee or sugar, or alcohol.

But by persevering with a mindfulness practice, impatience, boredom, and restlessness can gradually be transformed into feelings of peace and spaciousness.

If impatience and restlessness arise, just accept them; accept them as physical and emotional symptoms.

As an example, a few months ago, a student in the Trading psychology Mastery Course sent me an email with this subject line:

For those of you who don’t know, The Trading Psychology Mastery Course is a two week home intensive trader’s mindset program in which you learn to develop wisdom, patience, resilience, discipline – all the qualities a good trader must possess. And the program involves exercises such as sitting meditation.

So this particular trader [To preserve that person’s anonymity, I will name him John] took the course with high expectations of mastering his mind and attaining instant success in the markets.

After 5 days, he sent me an email saying that he found it very difficult to even sit still; halfway through the exercises, he reported feeling very impatient. He also had a nervous habit of constantly jiggling his legs up and down, a common form of restlessness.

Needless to say, the movement of his thoughts matched his impatience and restlessness.

I reassured him that his difficulties were very common and not a problem at all. In fact, a few months earlier, another student took the course and he had a mild form of Tourette’s syndrome — which caused him to twitch and convulse during the meditation sessions.

Despite that, he was able to access deep meditative states in the midst of a spasm.

Whenever you notice restlessness, boredom, or impatience, simply shift as much attention as you can back to your breathing.

As I recounted that story to him, John’s competitive nature clicked in and he decided to continue with the course.

But I encouraged him to be more kind and patient with himself, and I advised him to meditate on his feelings of impatience and restlessness — to notice them with a gentle curiosity; to not attempt to fight, suppress, or push them away but, instead, to just watch them objectively [from a third person’s perspective] and see how long they last.

So he began to do it; to watch himself without self-criticism, and this was an amazing breakthrough for him.

In just a few days John had better control over his impatience. In a few weeks, he was sitting in complete stillness and at ease with himself and his feelings. He was beginning to experience the control he was seeking. And in no time, he began transposing that newly acquired skill into his trading.

So you have to be very careful, and clever. And discerning (wise).

If you can just learn to see them as withdrawal symptoms, you can begin to see them with detachment and greater objectivity.

The way you can begin to do that is through conscious awareness. Whenever you notice restlessness, boredom, or impatience, simply shift as much attention as you can back to your breathing.

If you then concentrate on breathing, eventually you’ll reach a place of impermeability — a greater capacity to remain unperturbed.

Notice the next breath. Then notice if the old habits of being judgemental, creating stories and being obsessively goal-oriented are attempting to dominate your attention.

Nothing bad with being goal-oriented – it’s just that, in excess, this mode of thinking often wants us to be impatient, reactive and short-sighted rather than patient and rational, and far-sighted.

So notice that. And notice your following cycles of breath – as the air gets pulled in through your nostrils and expelled.

The more you concentrate on your uncontrolled breathing, the more the external stimuli that are causing you to lose balance of mind fade into the background.

You only have to make sure that your body is relaxed whether standing, sitting, lying… and if you then concentrate on breathing, eventually you’ll reach a place of impermeability — a greater capacity to remain unperturbed.