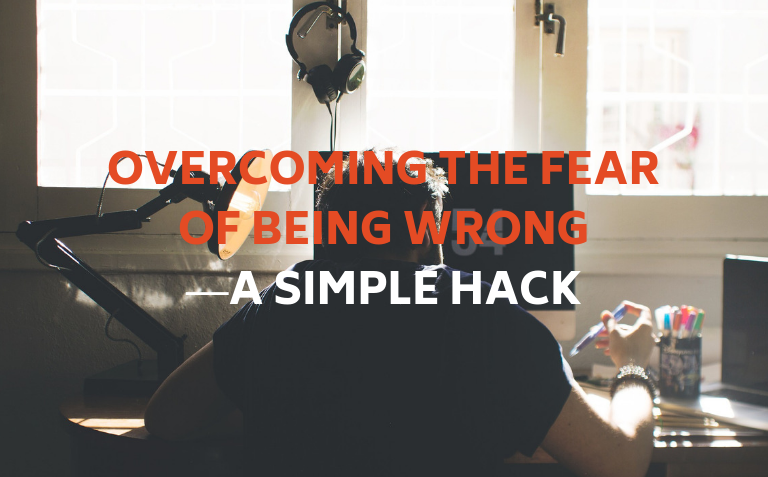 In this short post, I want to share with you what is probably the number one thing that stops you from being a consistently profitable trader and also a quick hack to change it in a handful of days.

Let’s get to it right away: The number one thing that is stopping you is yourself. It is your own mind, and, more precisely, your beliefs that get in your way more than anything that is happening in the external world.

Those things are super important; you can’t expect to win without them. But that should go without saying.

[Tweet “Overcoming The Fear of Being Wrong ―A Simple Hack”]

What I’m saying is that, at the end of the day, you are the man behind the wheel, and if some limiting beliefs are preventing you from pulling the trigger at the right time or sticking to your well-thought-out process, then success will be hardly attainable.

Even with a good strategy and excellent risk management.

In the past, I never realized how important beliefs are towards shaping our world and actions.

I guess I never really thought about it. I only began doing so when my failures as a trader stared me down in the face.

At the most basic level, beliefs are enduring patterns in our minds that translate to a certain attitude to a particular proposition — usually, it’s an attitude of acceptance, confidence, and commitment towards that proposition.

We use beliefs to understand and navigate the world, and we believe certain propositions because we have begun assuming at some point that they’re true, whether they are actually true or not.

Our beliefs form to keep us safe, that’s why we generally try to preserve them after they are formed –we guard them carefully.

Beliefs typically form from associations to pain and pleasure.  These occur when you’re a young kid because those are the most formative years for you, but they can happen at any other point in your life.

And usually, when formed, a belief will stick with you for a lifetime, that is, unless something major happens – usually another emotionally charged event that questions the validity of that belief.

Take the belief that failure is bad, for instance.

That belief is a major clutch for us traders because it directly translates as a fear of being wrong, which means that it’s bound to affect how you experience the prospect of unsuccessful trades, which are really just part of the game.

We all know that, as traders, we need to embrace being wrong because time and again the market will make us wrong.

And often, when we least expect it.

Despite knowing this, you can’t stop but feel bad about being wrong, can you?

That’s because your belief that failure is bad is stronger than your knowledge that losses are just part of the game.

So, to de-energize that belief, and to begin seeing failure as a more constructive thing (something that doesn’t threaten your sense of self but helps you grow and understand the game better), you could just keep trading, build a list of positive experiences, and expect that belief to die off over time.

And, if you stay long enough in the game, it will.

That’s one way to go about this.

But you could also be a little bit more proactive about it.

The first thing you would want to do is to recognize the positive intent.

Your brain (God bless it) is only trying its best to protect you.

Typically, your belief that failure is bad comes from when you were a small child.

You probably had an experience (or a bunch of experiences) where you felt pain, ashamed and rejected for being wrong, whether you remember that experience or not.

Whatever happened, at some point in your life pain got linked up to being wrong.

That’s where your belief that being wrong is bad stems from.

When you went through that initial painful experience, your brain began forming a pattern of anxiety, fear, defensiveness that aims to keep you away from experiencing that pain again in the future.

And I know this sounds insane because anxiety, defensiveness, insecurity, doubt… those feelings suck!

But they suck for a reason… your mind is just doing its best to stop you from feeling even worse.

So, again, recognize the positive intent.

Don’t just think it, really feel it, feel the gratitude, and maybe thank your brain out loud for doing its best to keep you safe.

Even though it’s a little bit confused about what’s best for you, it’s really just trying to protect you.

Acknowledging the positive intent like that will help create more ease and harmony in your mind.

remember: Beliefs typically form from associations to pain and pleasure.

So, now, to shift that belief, we need to create a new association.

For me, a few years ago when I did this exercise, I had to go down and write all the things that wanting to be right made me do.

As you go through your own reasons (in all likelihood, they should be very similar to mine), you’ll see how these negatively impact your trading.

The point is: you need to find the strongest leverage out. So, underline the number one thing that really hurts!

Then, you want to go through the pleasure that is there if you change.

This is a simple mental exercise that you could do once a day (as part of a trading ritual) before the market opens when you’re preparing yourself for the trading day.

Lastly, from now on, after taking a loss, notice the story playing in your mind about how this situation sucks, how discouraged or cheated you feel, how much of a loser you are, and so on.

When you hesitate to pull the trigger,  notice your doubts.

And, in both cases, just think and say the opposite.

Here is the pattern one typically falls into when perceiving an event:

But, with this little strategy, you’re stopping the cycle the moment you’re noticing it.

So, this is how you get to be a little more proactive about changing a belief like failure is bad.

It’s going to vary for each individual but also based on how strong that belief is.

But, as per my personal experience, I will tell you that, for the fear of failure, if you do this little exercise every day, you will start to see the difference within a handful of days.

If you flip your fear of being wrong to acceptance that you’ll be wrong, all of a sudden your whole world is transformed — a paradigm shift occurs.