As humans, our brains contain a feature called certainty seeking, and so, they’re hardwired to predict the outcome of every event we experience in life.

For the brain, there are only two possible outcomes in any given situation – safety or danger. “Will this make me safe or does this represent a threat?” Our perception determines these outcomes, and our past experiences dictate our perception. This is in our nature–the survival instinct.

When we experience certainty, we feel safe. When facing a similar situation to one we have experienced in the past, our brain recalls the old emotional response and reproduces it.

Well, first because it saves us tons of energy–instead of trying to figure out a new response, we just recall one we feel certain about.

When our brains, however, experience uncertainty, we feel danger. Our survival is questioned; In the face of threat, our bodies prepare us for action: either to attack the source of danger or to run away from it. 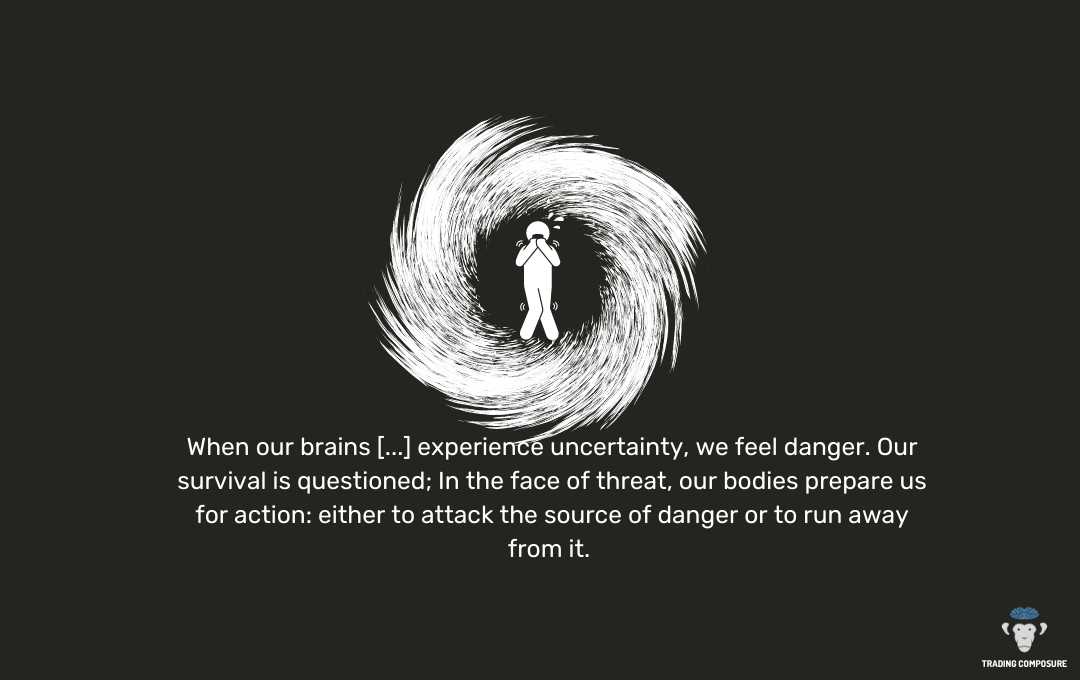 Without the capacity of predicting what will happen next, we are left in the middle of the unknown. We find ourselves in a completely new situation in which our brain doesn’t have yet the necessary schemas to process it.

Fear can be very useful to alarm us of potential threats. However, in the trading environment, it traps us more often than protects us. It gives rise to a lot of limiting beliefs and, ultimately, bad habits that make you repeat the same mistakes over and over again.

The market is an uncertain environment. Our bodies seek certainty for nature. How can we then feel comfortable in an environment that contrasts our nature?

The answer is simple: We need to remove fear! And to achieve this, we need to change our perception of the object of fear.

What constitutes a source of fear is highly dependent upon our perception. If we define something as a threat, we will experience it as threatening, and that will trigger a fear response.

Fear is highly correlated with the ego

The ego isn’t who you really are but who you think you are. It’s job is to protect us, so it’s always looking out for danger. Even if the situation isn’t dangerous, our ego expects something to go wrong. That is its role: seek out threats so it can protect us from any harm, real or imagined by the egoic mind.

This negative outlook on life is why the natural state of the ego is fear.

Your ego is your self-image created by thought. It’s your social mask requiring validation because it lives in fear of losing its sense of identity. ~ Thibaut

The egoic mind thinks for it to survive, it must be in control of our lives. It holds the belief that it’s always right as its only evidence to maintain control over us. When we feel fear, ie, out of control over a situation—uncertainty–our egos are a defense mechanism that allows us to keep ourselves under control.

So, when you try to satisfy your need for certainty in the markets, you are trying to fit market information into your existing beliefs (about yourself and the markets). Consequently, your performance becomes a mirror of your self-image. You take critical market situations personally because you see them as an attack on your identity / EGO –that you need to protect.

The ego is the defense of your mind: any and all defenses.

Why do we believe?

To defend ourselves. Therefore ego is our beliefs about ourselves: both right and wrong.

Let’s take the example of a trader who grew up in an environment that constantly brought him down. Growing up, he fed the belief that he is not good enough–this is part of his ego.

He got used to this feeling which became a habit–part of his comfort zone. His behavior reflects a lack of self-confidence and self-esteem. And although these are unproductive emotions, this trader is already used to them; it’s all he knows! It became his reality!

The image of “not being good enough” established his belief about himself –his ego. And this belief gave rise to all sorts of bad habits in the market.

As humans, we are constantly seeking to feed our egos. And the way we do this is by looking for situations that support our existent beliefs!

If the trader we are talking about believes he is worthless then, this leads him to search for life situations where he can sustain this belief –confirmation bias.

For instance, he will search for opportunities where he can feel like a victim. In trading, he will blame the market and protest that it’s against him. He will see loss as “I’m not good enough” and this will create an endless loop of bad habits in the market.

Have you ever asked yourself: “Why is this always happening to me?”

Well, here you have your answer.

The ego does not want an end to its “problems” because they are part of its identity. It gives definition to our self-image, makes us into someone, and that is all that matters to the ego. ~ Eckhart Tolle

So if you want to remove fear in trading, you need to remove your ego first! The one that seeks this control over everything. This is why it’s so important in trading to know your limiting beliefs.

In order to change our perceptions, we need to submit ourselves to new experiences with the object we fear –the market/ a loss / missing out on an opportunity

And the more you strengthen this new belief, the more ready you will be to search for new experiences on the object you fear. 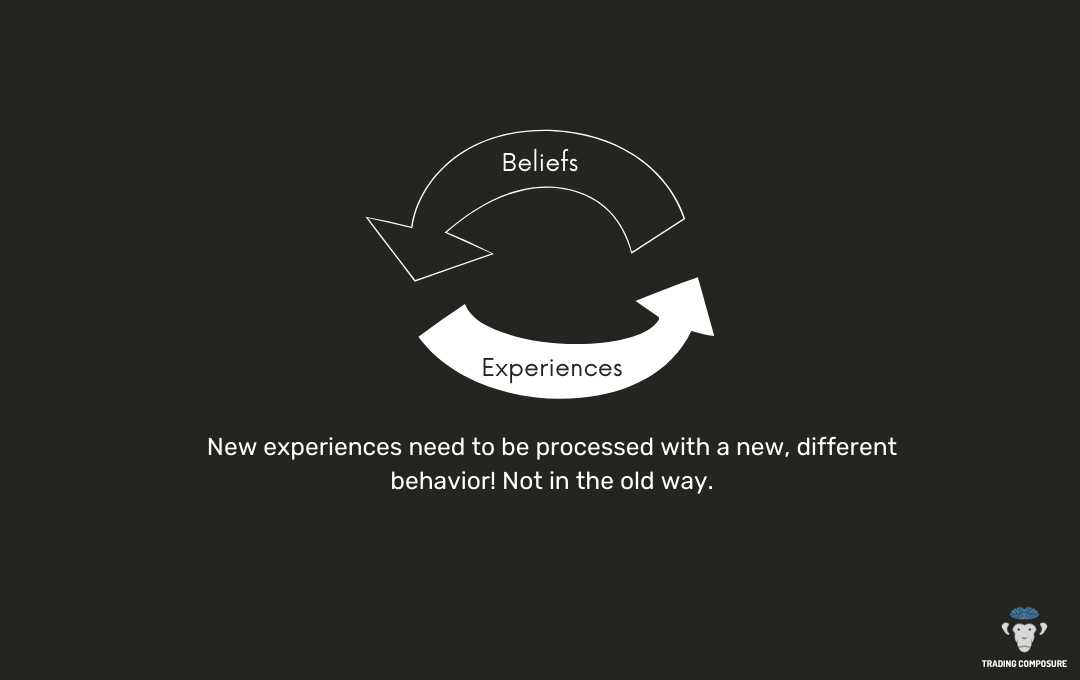 It’s all a cycle!

The hack is: These new experiences need to be processed with a new, different behavior! Not in the old way.

You want to practice a behavioral response that goes in alignment with the new belief you want to construct!

If you perceive one trading loss with the same behavior, nothing will change! You’re just repeating an automatic behavioral pattern!

As soon as you are aware of the emotions leading you to the same behavior and feeding the same old patterns and beliefs, you can choose to stop right there and disrupt the autopilot mode. And then, create a new pathway!

What you’re doing here is changing the normal course of your emotional patterns and replacing the old behavior with better ones that fulfills the belief you want to reinforce.

If one loss triggers emotions of fear, making you want to “fight” the perceived threat using revenge trading…

… as soon as you realize this fear is taking over your thoughts, instead of revenge trading you will use another behavior that’s healthier. For instance, executing a 5min breathing technique at your desk followed by writing down your thoughts, emotions and the consequences your behavior will bring!

In the beginning, when you disrupt the cycle for the first time, you’ll create a new neural pathway in your brain; one that reproduces this new association. 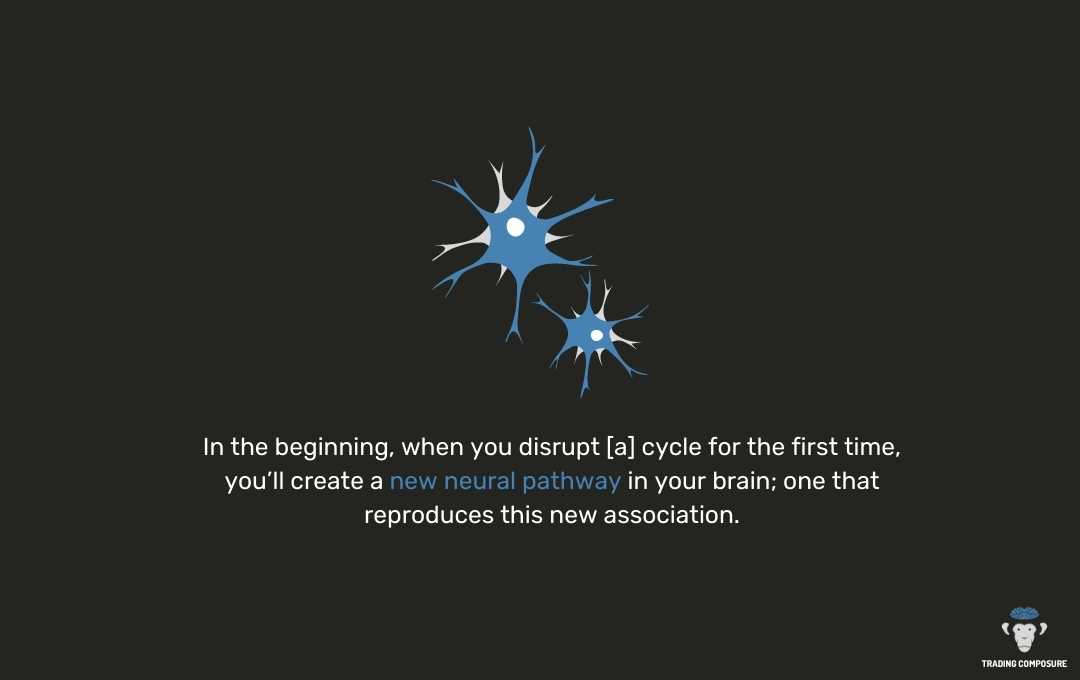 But this neural pathway will still be weak. If you don’t reinforce it, your brain will end up forgetting it and it will disappear. In order to make it stronger, you need to reproduce this new association as many times as possible! Your brain will then create a new association which will lead to a new belief!

Then, every time you lose in the market, your brain will predict the emotional response of your coping behavior and reproduce it automatically.

This is the way of changing your perception of the triggers that have been driving your bad patterns in the market!

Now, I have a small challenge for you: it requires a great deal of self-awareness. I challenge you to find out what has been triggering your mistakes lately.

It’s not our triggers that make us act the way we do, but the emotional state they create.

If you can label your emotions in the heat of the moment, you can arrive at your triggers easily. And when you know these triggers, you can create new ways of coping.

1. Be aware of your emotions and feelings in the heat of the moment

2. Discover what are your triggers are

3. Come up with an “escape activity” you can use as a coping behavior

4. Write down this new cycle (Trigger → Emotions → Coping behavior) on paper and hang it on your wall.

5. Every time you feel the old emotions arise, take a look at this paper. You’ll facilitate the process of change.

There are no secrets to changing your bad patterns in the market… if you want to sustain new beliefs, you need to reinforce new behaviors! 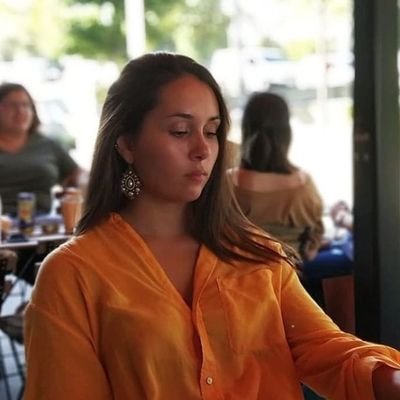 Sarah, aka The Perceptive Trader, is a Forex Trader and Trading Psychology Coach. She helps committed traders achieve the right psychology skills to profit in the market.

For the brain, there are only two possible outcomes in any given situation – safety or danger. “Will this make me safe or does this represent a threat?” Our perception determines these outcomes, and our past experiences dictate our perception.

Fear can be very useful to alarm us of potential threats. However, in the trading environment, it traps us more often than protects us.

What constitutes a source of fear is highly dependent upon our perception. If we define something as a threat, we will experience it as threatening, and that will trigger a fear response.

If you want to remove fear in trading, you need to remove your ego first! The one that seeks this control over everything. This is why it’s so important in trading to know your limiting beliefs.

It’s not our triggers that make us act the way we do, but the emotional state they create.