Revenge Trading Is an Expensive Habit. Here’s How you Tame it 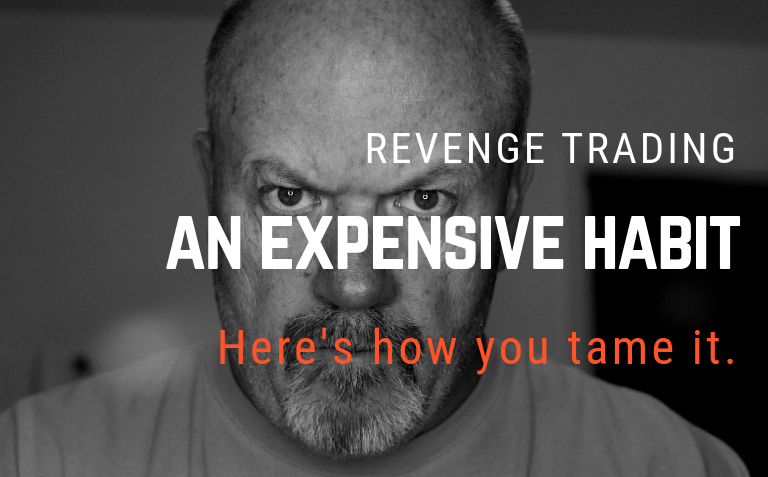 Imagine this: You initiate a trade and you’re pretty confident about it.

The market initially goes in your desired direction. You begin to salivate as you’re thinking about the potential profits.

Moments later, some news upset the market. All hell breaks loose, and now you’re down for the day.

[Tweet “Revenge Trading Is an Expensive Habit. Here’s How you Tame it”]

There are a few things going on here:

This phenomenon is called loss aversion.

We tend to be extremely attached to it, we feel anxious to give it up.

Ironically, the more attached we are, the more vulnerable we become.

The more vulnerable we become, the more we’re prone to revenge trade.

Revenge trade is a big no-no. Any trader with experience will warn you against it.

Because when loss aversion causes you to revenge trade, in all likelihood, you’ve lost your stability of mind and you’re bound to do things you’re not supposed to do – things based on emotions rather than a proven plan.

That’s why revenge trading is often seen as an expensive habit. Because, over the long run, it really is, even though you might get lucky and get away with it in the short-term.

So, revenge trading has to be eliminated from your mind and from your trading because it’s not a viable option.

And to do so, you really want to go to the source: work on reducing the tendency that we all have to be disappointed by losses.

Here are a few ideas on how to do that.

Becoming more aware of yourself — learning to become aware of the feelings of avoidance and aversion, or annoyance, or anger as they set in — can reduce loss aversion and help traders overcome potentially disadvantageous decision biases.

If you can just notice when you’re about to do something that goes against your plan, and, instead of acting on that impulse, take a timeout, breathe, and observe yourself in the midst of that internal turmoil, you’ll discover something possibly life-changing: Your awareness can hold (and experience) any thought, no matter how compelling, and any emotion, no matter how destructive, from a place of freedom.

You see, we are so consumed by the stories in our minds — we feel identical to all our thoughts and emotions — so much so that we don’t even realize how powerful a function awareness actually is.

But if you can add a measure of introspection to your ‘ordinary’ moment-to-moment experience, you’ll realize how unencumbered and free you inherently are.

Understand how loss aversion works, and then learn to control it in its own irrational reality.

In the book Thinking Fast and Slow, Daniel Kahneman documents the phenomenon of loss aversion really well. For instance, we are more upset about losing $10 than we are happy finding $10.

Roughly speaking, losses hurt about twice as much as gains make us feel good. And this alters our perception of things and causes us to make all sorts of flawed decisions.

Essentially, when you’re caught in loss aversion, you’re just allowing yourself to act on impulse and fear rather than from a rational assessment of what will be best for you, or best for the situation.

While this is a natural reaction, I’ve found that it’s not the best idea to just follow our impulses without pausing to consider.

We shouldn’t let ourselves get caught up in a story in our heads or a certain feeling in our body. That’s not helpful. Instead, we should refer back to our plan and follow the rules laid out in there.

Rule of thumb: Whenever there is a conflict between your rules and your feelings, always choose your rules. Feelings are always changing and therefore unreliable, but rules are consistent.

When you face an unexpected loss, when frustration, aversion and anger arise, just sit and face those feelings.

Pause instead of acting them out.

Stay with the physical feeling, instead of the story.

When you’re in loss aversion mode, there is a story in your head that’s causing it.

Notice the story… instead of dwelling on this story, bring your attention to how this feels in your body, physically.

Where is the feeling located — in your face, neck, stomach, chest?

What physical sensations can you notice?

Stay with these feelings as long as you can, returning to them when you notice your attention going back to the story.

What is the quality of the energy being felt in your body?

Is it a changing sensation, is it intense, pulsing, throbbing, stabbing, dull, aching, tight?

Open yourself up to these feelings. Don’t run away. Don’t reject. Accept their presence. Be curious and observant. See them as something to study.

Most people want to ignore, reject and push away… that’s why they lash out and end up revenge trading.

But they also go broke at some point.

You, be willing to be with your feelings in a friendly manner.

See that they’re not so bad. And if your thoughts try to convince you that they ARE bad, notice the thought, accept it, and then return to the feelings.

See that you can survive, even if you sit with uncomfortable feelings and thoughts.

See that they change.

Notice that you don’t have to be controlled by your feelings. And even if you don’t have direct control over them, you can choose to experience them differently.

You have the freedom to follow your plan and be consistent. The problem is that you’re lost in your thoughts and feelings by default, and most of the time, you let them control you. But again, notice how your awareness can hold any thought or emotion from a place of freedom, from the moment it arises to the moment it passes away.

I’m not claiming these steps are miracle solutions. None of this is easy. What I’m saying is that, in trading, things frequently won’t turn out as you expect them to.

But how you deal with the unexpected is really what will make or break you.

Difficult emotions are a part of the human experience. If you can become aware of any feelings of lack, loss, aversion, anger, frustration, impatience, the moment they’re threatening to capture you; if you can embrace them instead of running from them; if you can choose to direct your attention back to your plan, then you’ve won 90% of this game.

The rest is just making sure that you’re trading a viable strategy.

Mindfulness is about changing your relationship with yourself. In some sense, it’s befriending yourself.

You don’t have to meditate in a cave for years to realize that. A simple mindfulness practice at home can lead to amazing insights and changes in a short period of time.

Consider joining the Trading Psychology Mastery Course if you’re keen on exploring that.