Why Trading Losses Are Painful, And What You Can Do About It

Let me be clear and direct: trading losses are not a problem. To look at them as problems is to take the wrong step. Trading losses are part and parcel of this business. Everyone goes through losses. You can’t avoid them. The best you can do is to minimize their impact through strategic risk management.

But alright…. even with strategic risk management, the act of taking a trading loss is inherently painful. I get it. The reason is simple: where there is a perceived loss, there is pain. Inevitably. But emotions mainly arise in response to what you think something means, not to the thing itself.

Let me say this again for emphasis: emotions mainly arise in response to what you think something means, not to the thing itself.

Suppose you come back from the gym after an especially intense workout session. A couple of hours later, you feel some muscular soreness. But you are okay with it. You actually feel satisfied with yourself because you know you’ve had a good workout, and the soreness is arising as a result.

Imagine now that you didn’t go to the gym and started having the same kind of soreness or pain all over your body for no apparent reason, just randomly out of the blue. You would probably think that there’s something horribly wrong with you, wouldn’t you? You would certainly freak out, thinking you’re having a serious illness or something…

In the first case, physical pain was welcomed in the context of intense athletic exertion; it lets you know that you are performing at your maximum.

In the second case, the same physical pain in another context yielded a different response – one of fear and confusion. (something is horribly wrong with me!) 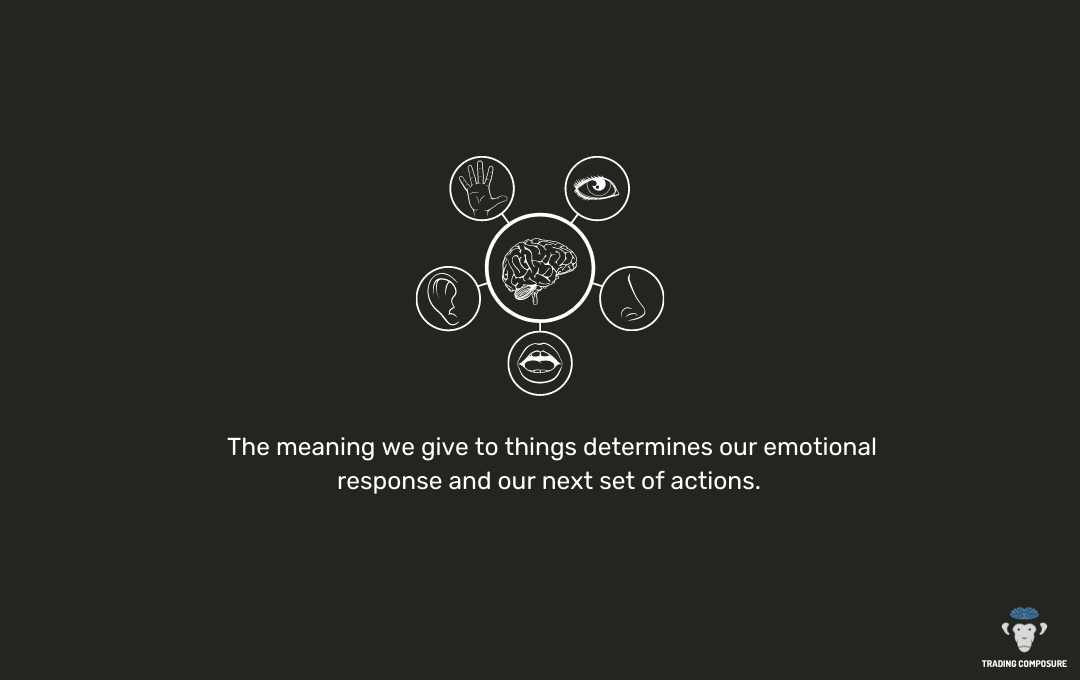 So you see, the meaning we give to things determines our emotional response and our next set of actions. Even emotions that seem extremely direct and biologically determined are mediated by meaning.

For instance, your mother kissing you will produce an entirely different emotional response than your girlfriend or wife… Again, it all depends on the meaning.

Mindful awareness is a quality of mind that you should learn to develop because it’s a kind of freedom from fixed meanings and stories. This is not to say that meaning-making is always bad. It’s not. It is useful, but mindful awareness frees you from automatic interpretations of habitual responses, and that gives you the benefit of choice.

When taking a trading loss, here is the pattern one typically falls into:

– The event is perceived and immediately interpreted, based on some familiar framework of meaning-making.

– An emotion arises in response to the meaning you have given it.

– You’ll give equal weighting to all your thoughts and emotions, even though they don’t all deserve to be listened to and trusted.

– You have no (or little) choice. The energy of said emotions will demand expression. They have to be channeled one way or the other. So you’ll eventually do something that seems mandatory based on your interpretation of those emotions.

But, with mindful awareness:

– You’ll notice the process of meaning-making as it starts, and you’ll discern wisely what is arising as feelings in your body.

– You’ll feel those as they are, without judging or wishing things to be different (full acceptance of what is). In doing so, you’ll automatically defuse them, and you’ll then have the freedom to choose how you want to respond instead of just blindly reacting.

– You’ll be able to trade in the moment—and at the same time, to accept any outcome.

How To Develop Mindful Awareness

For instance, many systems of meditation will have the meditator focus their mind upon some items, such as prayer, a chant, mantra, a candle flame, a religious image, or whatever, while excluding all other thoughts and perceptions from their consciousness.

The result is often a state of rapture that lasts until the meditator ends the session of sitting. It is beautiful, delightful, meaningful, and alluring…. but only temporary. That locks you again in story-making — why is it over? I want more of it, etc.

So, you need a meditation practice that gets you out of that cycle; that helps you develop a quality of mindful awareness so that you can learn to notice things, states, and conditions as arising and passing, and doing so with complete equanimity.

Here’s an example of one:

After you’ve picked up a meditation practice, look to apply the quality of equanimity you develop in the practice to your trading. Focus, patience, wise discernment, non-attachment —the skills you acquire and cultivate in meditation and the skills you need to thrive in trading are one and the same. 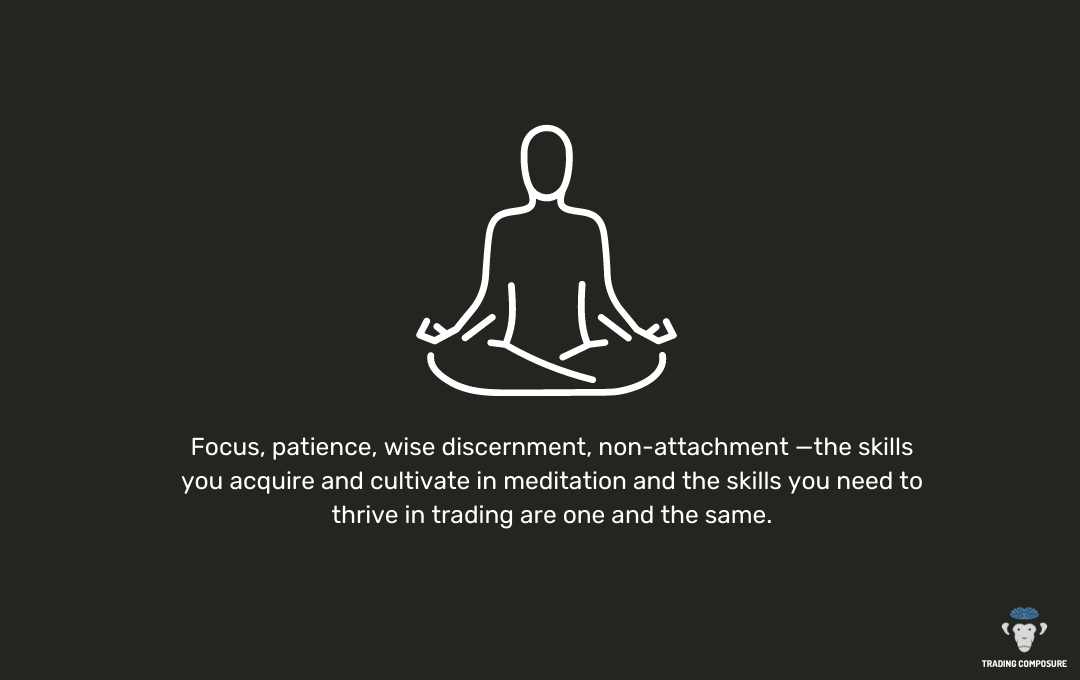 And when a trading loss occurs inevitably, instead of automatically thinking of it as a bad thing, try to feel the energy of the loss in your body without generating additional stories and meaning. Just feel that energy, stay with it fully and try to notice when it passes away naturally, on its own.

This means you can undo patterns of feeling and behavior that don’t serve you well.

For instance, if a trading loss happens as a result of following your trading plan, with mindful awareness, you’ll first notice the emotions in your body and the thoughts feeding these emotions. And then, you can reframe it–akin to the muscular pain you’d feel when you go to the gym. You can practice appreciating the controlled trading loss as a positive. It’s a good thing. And the pain you feel from taking that loss is good pain. It’s necessary pain.

Now, if a loss happens as a result of NOT following your plan, same thing: notice the emotions in your body and the thoughts feeding these emotions. Then, practice letting go of the pain–you’re letting it go naturally.

When you learn to let things happen without exerting any pressure; when you find it possible to experience all emotions as vivid, non-conceptual energy without generating any stories, you are essentially freed from compulsion. And then you can redirect your attention to your trading plan.

Trading losses are part of the trading game. And mindful awareness helps us accept and process them emotionally. Mindful awareness is a state of complete acceptance of whatever is arising and passing. It depends on opened perception and habitual categorization suppresses that. The automatic meaning you give to a situation blocks your view of it. You see only interpretations, not the full complexity, variability, and diversity of reality.

Mindful awareness recognizes, not rejects, the fact that the journey of living is composed of all sorts of arising and passing conditions, and it accepts them all fully as they are, with the understanding of their impermanence. And there’s real freedom to be found in it.

If you want to explore this topic more thoroughly with me, check out the Trading Psychology Mastery Course–here’s a $50 off coupon to get you started: EQUANIMITY

Wishing you a profitable trading week,

Trading losses are part and parcel of this business. Everyone goes through losses. You can’t avoid them. The best you can do is to minimize their impact through strategic risk management.

Emotions mainly arise in response to what you think something means, not to the thing itself.

Mindful awareness is a quality of mind that you should learn to develop because it’s a kind of freedom from fixed meanings and stories.

Focus, patience, wise discernment, non-attachment —the skills you acquire and cultivate in meditation and the skills you need to thrive in trading are one and the same.

Focus, patience, wise discernment, non-attachment —the skills you acquire and cultivate in meditation and the skills you need to thrive in trading are one and the same.