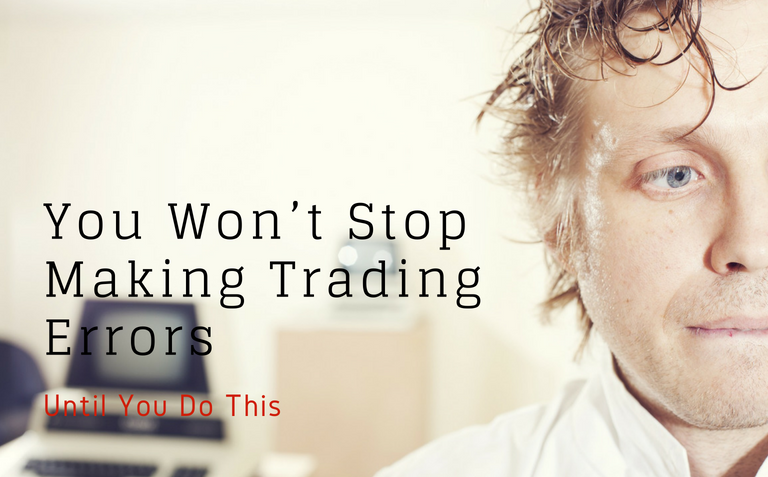 We’ve all done it before… we have a plan, we come in the market well prepared, but then, we end up behaving in ways that are irrational and destructive.

It hurts! So, naturally, we resolve to behave differently in the future.

The entrenched belief is that the way to change behavior A is to begin behavior B.

And so, “this time”, we tell ourselves, “it will be different.”

Occasionally, it is. Most often, it isn’t, and we find ourselves back to square one. It’s like… we never learn!

And what we discover is that, however intensely we wish to change, it’s unfortunately not that easy. We can’t just drop a behavior just because we’ve decided to for whatever reason.

Whatever that behavior is – not cutting losses, not letting a winner run, getting angry, risking too much, not entering a trade where we should, entering too late – and whatever the opposite behavior we seek, there comes a point where we become convinced that our repeated failure to change is evidence of our weakness or incapacity.

But truly, this is not an accurate depiction of reality. We are not weak or incapable, we are only ignorant of what drives our behavior.

If we can see what drives our behavior — what comes PRIOR to the “I’m gonna give that losing trade a little more leeway”, or “I will close this **potential home run** trade for break-even” — then this can potentially be a game-changer, right?

In every part of your body, there are sensations arising and passing at all times, in every moment.

And there’s a deep connection between these sensations, what’s happening in your mind, and ultimately what gets expressed as a behavior in the outside world.

We like to think that our behavior is driven by a careful and rational line of thinking but, in reality, it’s often not the case. In fact, in each and every moment, pleasant and unpleasant thoughts are creating sensations within our body and we are constantly reacting to them.

Whether those thoughts (and their ensuing sensations) correlate with facts in the outside world is another question. But try this little experiment and see for yourself:

How are you feeling right now?

Really turn your attention within your body and try to see if you can detect a desire to do something based on a thought you just had.

Maybe it is that you want to grab something to eat? (desire)

Maybe you want to stop reading this article? (aversion)

Maybe you want to head on Facebook to see what’s happening there? (desire)

Just pay attention to your body as your mind jumps from desire to aversion.

Soon enough, it’ll become clear to you that all you’re doing in each and every moment is reacting to arising sensations. More often, they’re discomforts urging you to do something about it. So you react blindly to shake off the discomforts. You remove a stop-loss;  you don’t place a trade, you enter with the wrong position size… all in an attempt to make the sensations go away.

Everything that people do, from fidgeting in their chair to getting angry for petty reasons, people are actually reacting to sensations in their body. All the time!

When you find yourself blindly reacting to something, or more simply when you realize that you’ve been lost in a thought, observe the sensations in your body. How does it feel? Don’t intellectualize your feelings… just feel them as they are. Warm… Cold… Tingling… Vibrations… Tensions… Where do you feel those? And more importantly, See how they pass on their own without you trying to push them away.

Often, what you’ll realize is that you always have a choice.  The problem is that mindlessness makes you feel like you don’t! And because you’re constantly trying to shake off bodily sensations, it becomes the very reason why you get locked in compulsive patterns of behavior, in and out of the markets.

So for once, try to gain awareness of that *unconscious* process.

You’ll step out of the prison of blind reaction and, in time, you will pour that quality into trading. Doing the hard and necessary thing won’t be that hard anymore. And this is what mental strength is all about.