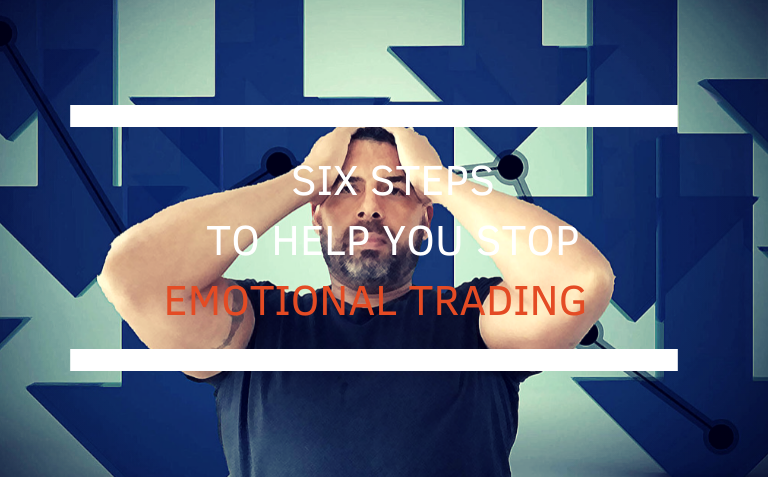 Emotional trading is a problem for many traders and it stops them from being consistent in the market. In this article,  we see what causes emotional trading and I share six steps to help greatly reduce it, or stop it altogether.

As a trader, assessing and reacting to market risk is one of the most important things you’ll have to do. Unfortunately, humans as a whole are pretty mediocre at this task ― traders and investors reliably make decisions that economists deem “irrational.”

This is more commonly referred to as emotional trading.

Financial markets are a by-product of modern era and, in the grand scheme of things, our brains have evolved over millions of years for survival out in the open. They haven’t had the time to get good at making sound and perfectly rational financial decisions.

We have brain processes ― a logical one and an emotional one ― that are constantly competing against one another for our future expression in the market. And usually, for the trader with little to no market experience, who trades money he/she can’t afford to lose, or who has a short fuse overall, the stage is set for an incident.

But even more seasoned traders make emotional trading decisions that they consider stupid in hindsight. Perhaps less often than inexperienced traders do, and with minor consequences, but those errors do happen.

Often, even though we know with the logical part of our brain that we’ll get better results if we follow our trading rules, so many of us do the exact opposite, despite explicit knowledge of what we should do.

We remove stops, we cut winners short, we go in with too big of a size… I mean, we’re clearly not purely rational beings ― and we can’t be because that would make us robots, not humans. 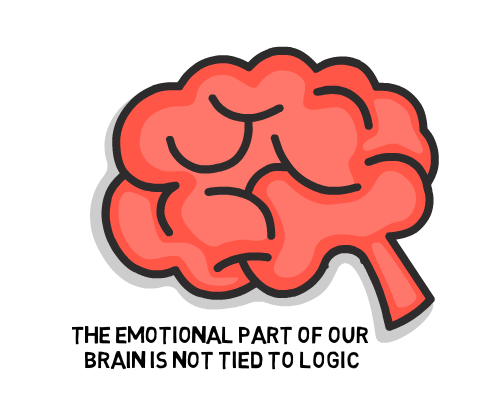 In fact, our inability to be purely rational is the work of the emotional part of our brain, the limbic system ― and it’s not tied to logic.

The limbic system is tasked only with identifying threats and rewards. It is evolutionarily primitive, it is strong, fast, and more importantly, it is very difficult to ignore.

Sometimes, it may be tempting for you to want to suppress that emotional part of your brain. After all, in trading, you hear this all the time: “Control your emotions!” And naturally, you begin thinking that if you could do that you’d finally be consistently profitable in the market.

But, not only is it impossible to fully ignore our limbic system, it’s actually undesirable, and for a very simple reason: if we can’t feel, we can’t decide.

And, at the same time, there’s a fine line. You don’t want to feel more than you think because when you do, this results in compulsive, reckless behaviors that end up costing you a lot.

So, what’s the solution then?

But the logical part of our brain is weak and easily overpowered by the emotional part.

For instance, most traders know how to trade; they know how to read charts and manage risk, but they can’t trade profitably because the emotional part of their brain is strong. When trading, it anticipates joy from profits and being right, and pain from losses and being wrong, and it seeks to go towards or away from those feelings at all costs. 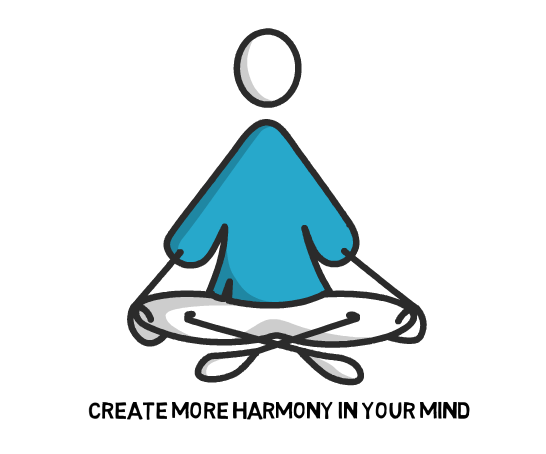 So, as a trader, in order to become a better decision-maker and a better trader overall, you need to remember that.

And second, you need to find ways to create more harmony in your mind so that your two main brain processes are not in this constant tug of war.

Here are six steps to help you achieve this and stop emotional trading.

Make sure you understand your trading system, its strengths and limitations, and what it will help you achieve in the market if you are the trade it consistently.

This will give you the confidence to follow it through good and bad.

This has to be the first step, above anything else.

Step #2 – Trade with Money You Can Afford to Lose

When taking risk, you’re certainly doing so with the expectation of earning something in return. At the same time, you must also think of the money you’re risking as already lost.

And you should be happy taking that risk knowing that the money is already gone because the trade idea is worth a try.

If you do that, then it’s a good risk.

If you’re worried about not being able to make ends meet because of that bet, then it’s a bad risk, and you should think twice about placing that trade. If you don’t, you will only perpetuate emotional trading.

Of course, needing money and trading is possible, but it would take some pretty strong mental discipline. Most people don’t have that.

It’s very simple: By keeping your risk small, you’ll get to place a lot of small bets with big reward potential.

And, because you’re risking less, it’ll be easier for you to make more rational decisions while keeping emotions and ego out of the way.

But perhaps more importantly, by risking less, you’ll get stay in the game, and by staying in the game you’ll get to learn and develop an expertise. 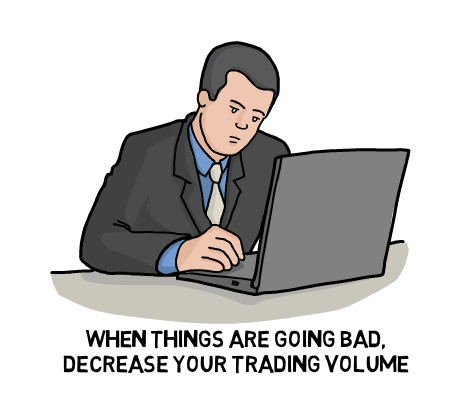 Step #4 – Decrease Your Trading Volume When Things Are Going Poorly

Decreasing your trading volume when you’re not doing very well will help decrease the likelihood of emotional trading.

This is a tactic famous trader Paul Tudor Jones swears by.

The best way to become more aware of your ego and the traps it tends to set up for you is to meditate.

Practice this: Take a few minutes to sit still, and focus on your breathing – the air coming in and out at the level of your nostrils.

Notice when your mind wanders and kindly return to observing the breath.

Of course, there are lots of other ways to meditate, but this is easy and simple, and it shows you how to watch your thoughts, feelings, and urges that come up, and see that you don’t need to act on them.

At first, you might not be good at this, but that’s why you practice. And, as you get better and better, you’ll learn to handle yourself better as a trader, which means that emotional trading will be more under control.

The final technique for creating harmony in your mind is to make sure that you’re well-rested, well-fed, well-hydrated, at peace with yourself, and as much as possible under little to no financial pressure.

The logical, executive part of our brain is very sensitive to little things like that.

It doesn’t take much to impair our judgment.

If you’re about to make a difficult decision about risk, first eat a granola bar, drink some water, and check how you’re feeling.

If you’re tired, get some sleep. The market isn’t going anywhere, but your capital is if you trade with a compromised mindset and carry on with emotional trading.

So, to summarize, the reason with most traders fail isn’t so much that they lack a good trading strategy.

Fundamentally, the problem is a psychological one.

That said, the problem is solvable, not overnight but over time. With the right approach and support, you can greatly reduce emotional trading, or stop it altogether.

Speaking of support, I just released a new course called the Psychology of Risk For Traders, and it’s free.

In this course, we see how to become a better decision-maker in the market. We also see how to develop a more thoughtful approach to risk management so that you can begin to manage uncertainty and minimize adverse events more effectively, in the market, but more broadly in your life.