Obsession with Outcome is a Trading Account Destroyer! Here’s How You Drop It. 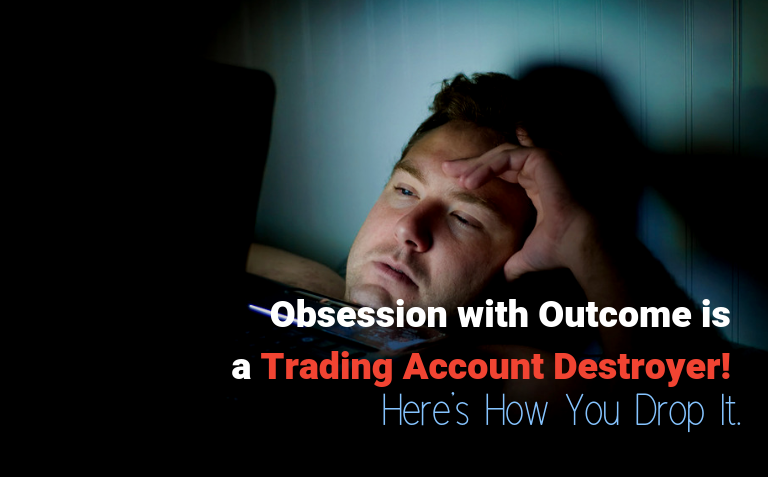 The market is fascinating. Although you can spot patterns and make predictions accordingly, the immediate outcomes of these predictions aren’t always predictable.

Obsession with Outcome is a Trading Account Destroyer! Here’s How You Drop It.

We’re dealing with probabilities, not certainties. And because we can never be certain about the outcome of a trade, underlying much of our trading experience is anxiety, fear, dissatisfaction, doubts…

And struggling traders react to these anxieties and doubts in one major unhelpful way: They get obsessed with outcome and develop a compulsion to check their PnL 20x a day.

When they’re not in front of their computer(s), they do it on their phone, when they’re having dinner, when they’re relaxing at night… and they get caught in a cycle of anxiety and unhappiness.

If they could just learn to accept uncertainty and deal with their emotions, they would have much more ease and peace. Their trading performance would also likely improve.

You can’t let short-term variations in your PnL get to you. It’s a weakness to get caught up in that.

Obsessing over the moment-to-moment fluctuations in your PnL increases the likelihood that you will mindlessly override your rules at some point.

It’s going to happen. It’s only a question of time.

But if you can resist the tendency to be obsessed with outcome, this will eventually work to your advantage.

First, I want you to uninstall any app that you have on your phone that:

In today’s era, it seems like the whole world is conspiring to make this tendency to check our PnL 20x a day more prevalent.

The advent of technology and the devices that feed it to us has made us control freaks and bad at delaying gratification.

Now, uninstalling apps on your phone, and stepping away from your computer so that you don’t compulsively check your PnL and sabotage your performance, yes that works. But it’s a short-term band-aid.

Here’s something more long-term: Try strengthening your awareness of how unruly your mind can be, and practice not getting caught up in it.

Yes, this is true power!

So here’s a little exercise I want you to do.

Sit right now where you are for at least 10 minutes, close your eyes, and just pay attention to your breath.

You’ll likely notice where the knee-jerk, compulsive reaction starts: You’re sitting there and breathing, and some part of your mind doesn’t want to be there doing that.

Instead of listening to that inner voice and running from what you’re currently feeling, instead of getting away from it into thinking about stuff or getting out of the meditation, just stay with it and pay attention to what’s arising for you in the moment?

No matter how strong the urge is, can you stay with it? Not clench your teeth and bear it, but let yourself feel it from a place of acceptance, of curiosity of what’s arising, and of openness.

It’s not about using willpower; it’s about observing reality at the subtlest level. When you do that, you start noticing that compulsions are similar to an itch. The more you give it importance, the more you scratch it, the bigger it becomes.

Now, sometimes the compulsions we feel are small and manageable, but sometimes they’re quite big and compelling.

What do we do when that happens?

Same thing: stay with it like a good friend. Allow yourself to face it, feeling it from a place of freedom.

At some point, you’ll start to realize that it’s not so bad. It’s just something that comes up, like a wave in an ocean. And just like a wave, it eventually fades away.

Once, it could be said that trading was mostly a matter of strategy. That was before the advance of technology when people were trading bigger time-frames, when commission rates were astronomical, and when people couldn’t check their position 20x a day.

But now, more than ever, trading is a matter of mindset. Yes, you need a strategy, but you also need to be good at managing your states of mind, or else it all comes tumbling down like a house of cards.