Why Is Trading So Simple, Yet So Hard —And What You Can Do About it 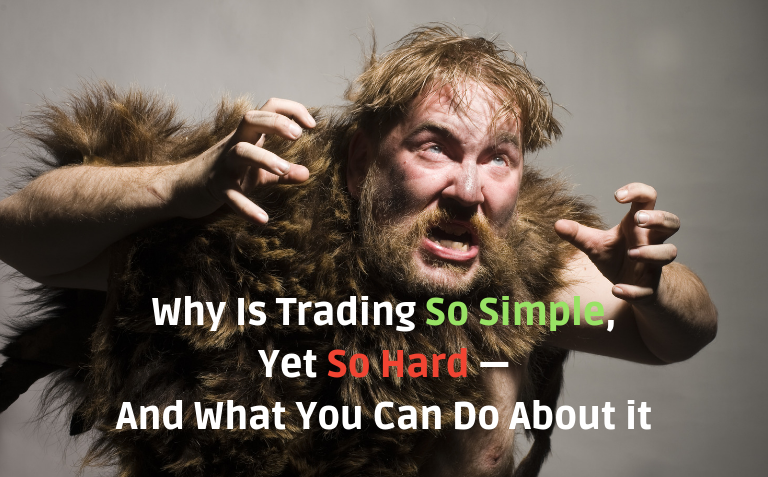 Why is it so difficult to succeed as a trader?

Let me start by eliminating one wrong answer commonly thought to be true: It’s because people can’t find a reliable trading system.

This can’t be true.

Why Is Trading So Simple, Yet So Hard —And What You Can Do About it

But don’t believe me, just think about it: If it were true, all the people who have a proven trading system (one that has been proven profitable) would all be making a killing in the markets.

What’s more, the people selling you those systems would all be using them to make a killing themselves instead of trying to sell them to you.

Trust me, it’s not that hard to find a profitable trading system. No matter how complex or simple, if the ideas (a trading system is a set of ideas) make sense mathematically, then they’re sound ones.

And figuring this, I’d say, is the easiest part of trading.

Here’s another typical answer to the question “Why is it so difficult to succeed as a trader”: It’s the failure to manage risk.

Ok well, this one is actually true, but it is a direct result of what we’ll discuss shortly.

“Our minds did not evolve to make us good at trading. No, our minds evolved to help us survive in a world fraught with physical threats.”

To see why it’s so difficult to succeed as a trader, we need to journey back through time.

The modern human mind, with its extraordinary ability to analyze, plan, and create, has largely evolved over the last 100 thousand years, since our species, Homo sapiens, first appeared.

But our minds did not evolve to make us good at trading. No, our minds evolved to help us survive in a world fraught with physical threats.

Just try this thought experiment: Imagine for a second that you’re an early hunter-gatherer human.

What are your essential needs in life?

Well, there are four of them:

Those are all essential if you are to survive, reproduce, and spread your genes. But none of these things mean much if you’re dead, do they?

So the number one priority of the primitive human mind was to look out for anything that might harm you and its main purpose was to avoid it at all cost!

In other words, the primitive mind had one program running on its hard drive: “Don’t get killed.”

And the better our ancestors became at running that program, the longer they lived and the more they’d promulgate their genes.

And now, after about a 100,000 years of evolution, things haven’t changed much…

Okay sure, our brains have changed quite a bit since those ancient times. They’re bigger and better in many ways —just as it would be if you were to take an old computer and upgrade it with a new hard drive, some additional RAM, and maybe a new processor…

But despite those changes, our minds are still running the same old program.

If there were some kind of political event in the future whereby technology and knowledge were banned from the surface of this earth, I bet it that within a few years, we’d be back to the dark ages.

And within a few more we’d regressed to the stone ages.

That’s how much we still share with our primitive ancestors. We’re the same old species running the same old program.

And so, if we’re still running the same program, we’re also still constantly trying to avert physical threats, just like we used to.

Here are three main ways we do that:

1.    We assess and judge almost everything we encounter.

This is always in the periphery of our minds: Is this good or bad? Safe or unsafe? Harmful? Helpful?

These days, though, it’s not wild cats or 600-pound grizzly bears that our minds warn us about. Instead, it’s not making enough money, being rejected, not being able to pay the bills, embarrassing ourselves, or any of a million and one other common worries.

2.    We have an unquenchable thirst for security and certainty.

For any early human, the general rule for success was this: the more, the better.

No surprise, then, that the modern mind continually looks for more: more money, more status, more love, more indicators… we crave certainty and desperately attempt to create it even where it cannot exist —like in the markets, for instance.

3.    Our need to fit in permeates all aspects of our lives.

Another essential for the early human was to belong to a group. If your clan booted you out, it wouldn’t be long before the wolves would track you… and find you.

So how does the mind protect you from rejection by the group?

The modern-day mind is also continually warning us against not fitting in. That’s the central theme of what afflicts it. Our desire to fit in is so pervasive that it affects everything we do.

We’re all too human.

So, evolution has shaped our minds so that we’re almost inevitably destined to suffer psychologically: to compare, judge, and criticise ourselves; to focus on what we’re lacking; to desire certainty, to be dissatisfied with what we have; to imagine all sorts of frightening scenarios, and to be rigid —most of which condemns us for perpetual failure in the markets.

No wonder then why it’s so hard to be successful as a trader. The old program that is running on our hard drive makes us unable to manage risk efficiently while maximising potential profits because we’re so rigid with our expectations and flexible with our rules, when we should be doing the exact opposite.

It’s a real problem —we’re all too human.

Now, where does that leave us?

The good news is that we can learn to avoid falling into such mental traps. We can’t avoid them for good once and for all because they’re part and parcel of our human condition, but I’d say, we can avoid them at the very least 70% of the time.

But that’s largely enough if you want to thrive in the markets.

In essence, we can learn to handle our thoughts and our emotional states much better so that we’re not as caught up in blind reactions as we’re currently used to.

These following four steps will show you how to do so.

You must learn how you get stuck in those mental traps – the old programming as I called it earlier.

In short, you must seek to understand your thoughts and feelings. In doing so, you will learn how to fundamentally transform your relationship with them.

This is an essential first step, and will help you effectively override many aspects of the mental program cited above. So please don’t skip it—you can’t escape the program if you don’t know how it works in the first place (experientially not just intellectually) and how you’re keeping it running.

If you want to know more about how you can do this, check out this extremely short guide on how to become an emotionally stable trader.

It’s of critical importance that you practice what it is that you want to master.

For instance, here, it’s trading…. Ok great! Reading books and learning grandiose theories might eventually make you an expert on anything trading/investing-related. But understand, this doesn’t say anything about your ability to actually trade.

To get good at trading, you have to practice trading. There is no substitute.

This might sound like a mere platitude for you because let’s face it, it’s preached all the time. But rightly so because this is a very important point. Instead of chasing winning trades and averting losing trades (which perpetuates the cycle of fear, rigidity, and delusion) you have to develop a capacity to focus on a proven process that will lead (probabilistically speaking) to a specific goal.

So in that sense, the short-term fluctuations don’t really matter. They contain a lot of noise. And shifting your way of thinking (from one that is caught up in short-term outcomes to one who trusts the process and focuses on nailing that, trade after trade) will give rise to a sense of vitality and fulfillment that isn’t contingent upon the vagaries of chance.

Because basing your happiness on short-term trade outcomes —things that are in and of themselves ever-changing and noisy— is self-imposed suffering.

But if you learn to let go and trust the process, you’ll be surprised by how well your long-term results might end up shaping.

It doesn’t matter how long you’ve been trading; how much of an expert you are, at times trading will be strenuous —it’s in the job description.

This is where cultivating a sense of perspective will come in handy, while knowing that you are right where you need to be and doing the best you can with the knowledge you have.

So that you can cultivate a form of well-being that isn’t dependent upon the ups and downs in your PnL.

There’s no instant recipe for transcending our preconditioned mentality. Change is always a process. But if you’re determined, and if you apply the above steps, you should come out on top and dramatically improve your chances of success in the markets.

As a recap, here’s what we’ve seen:

It’s not a lack of a proven system that makes most people unable to be consistently profitable in the markets, it’s that they’re all too human.

The antidote to this problem is in a four-step process:

And as a closing statement, I want you to remember this: If you approach the markets in unconventional ways, eventually you’ll get unconventional results. 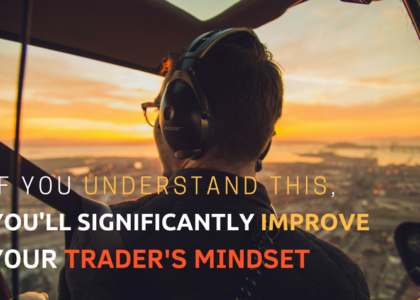 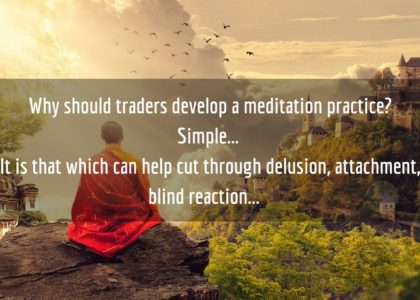 The Right Mindset — Why Traders Need It
Long Posts

A Trader’s Biggest Competition
Short Posts
TRADING COMPOSURE SCHOOL
TWO GROUND BREAKING COURSES
Learn stability of mind and great trading processes
WITHOUT THE BULLSHIT
ACCESS
Recommended
BOOKS FOR TRADERS
"Reading is to the mind what exercise is to the body."
SEE THE LIST
Learn to trade with a carefree state of mind
START HERE