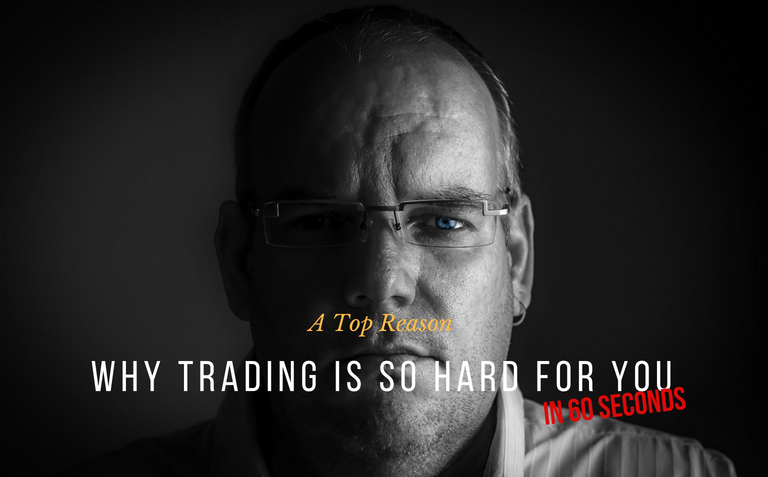 As I sit back and reflect on my journey as a trader –where I was and where I am today– I can clearly point out the things I didn’t get right at first.

For instance, one of the fundamental lessons I’ve learned and come to accept is that control in the markets is an illusion.

The analyses, all they tell you is that something is likely to happen. But if you use that information to bet the farm on any particular trade, you are bound to be disappointed.

So, we don’t really know how things will turn out. And that’s OK.

Not knowing how things will turn out trade after trade can be a scary thought. I’m not going to lie. Especially when money is on the line. But it doesn’t have to be.

A Top Reason Why Trading Is So Hard For You

For a long time, I have made trading such a difficult and consuming endeavor just because of my inherent craving for certainty. The act of wanting and needing my trades to turn out a certain way caused me a great deal of anxiety and frustration.

But then, I learned of a simple way to dramatically reduce the anxiety and the obsession, and it’s only much later that I discovered it: Acceptance – of the unknown.

Acceptance is about embracing life and its circumstances as they are.

It’s very different from the act of ‘tolerating.’

Acceptance literally means ‘taking what is offered as it is wouldn’t wanting or wishing it to be different.’

It doesn’t mean giving up or admitting defeat; it doesn’t mean just gritting your teeth and bearing it. It means fully opening yourself to your present reality —acknowledging how it is, right here and now, and letting go of any struggle in this moment.

But what if you want to improve your trading performance and not just accept it as it comes?

I get it… it’s a fair point. The thing is, you will improve your performance by accepting that the market is ultimately out of your control and that the only thing you do have control over is your acting on your plan – and not your whims and fantasies.

So you see, no matter how you look at it, the most effective way to make changes in your life is to start by fully accepting that some things are out of your control, and be okay with it.

Suppose you live in Vancouver, BC, and you’re driving to California. But you’ve never made the trip before.

You have a plan; you also have a good car and enough gas.

In order to safely take the next step, you first need to trust that you’ll reach your destination if you follow the route indicated on the plan.

If you don’t, then you’re likely to head to Alaska or New York. Or somewhere else.

Acceptance in trading is just like that – you have a trading system has been designed using common sense and fully backtested.

And then, you just follow it – minus the anxiety, the resistance, the obsession – fully trusting that it’s going to lead you somewhere.

And the best part is that you don’t need to know what will happen next to make money. You just need to follow the system as it is and as it wants you to use it – nothing added or subtracted from it.

Acceptance is a realistic appraisal of where you are and what conditions you’re in.

Trading will be a far more effective and profitable experience when you start from a place of acceptance. All the time and energy that you waste on struggling with thoughts and feelings could be far more usefully invested in taking action—the right kind of action.

When I truly began understanding this, it completely changed the way I placed and managed my trades. I did it with more ease, which certainly impacted my performance.