This Zen Story Will Make You Appreciate The Process of Trading

I’m a sucker for stories with a powerful message.

Especially those coming from the Zen tradition.

They often seem strange and confusing, but if you look closely, they contain profound wisdom.

Below is one of my favorite Zen stories.

This Zen Story Will Make You Appreciate The Process of Trading

The Old Man and The Practice.

One day, a boy playing on the beach saw an old man in the distance. He was in a sitting in a squat position and seemed to be looking down.

As the boy moved closer, he saw that the old man was drawing a perfect circle into the sand.

“Hey, old man, how did you draw such a perfect circle?” the boy asked.

“I don’t know, I just tried, and tried again…here, you try.” The old man replied as he slowly turned his head and looked at the boy.

The boy took the stick and the old man slowly walked away.

The boy, perplexed, began drawing circles in the sand. At first, his circles came out too wide, or too long, or too crooked. But as time went by, the circles began to look better and better.

He kept trying and trying, and then, one bright morning, he drew a perfect circle into the sand.

Then he heard a small voice behind him.

“Hey old man, how did you draw such a perfect circle?”

This short and beautiful Zen story centers on the circle as a shape and symbol of perfection.

The “circle” (called Enso, formally spelled Ensō) is a sacred symbol in Zen. It is traditionally drawn using only one movement as a meditative practice in letting go of the mind and allowing the body to create — as the singular movement allows for no modifications.

In the story, the perfect circle drawn in the sand represents the necessity of repeated effort (practice makes perfect), while the narrative circle of the story (beginning and ending with a small boy on the) represents the circular nature of life.

Often, as traders, we view success as a destination, and we see ourselves at the beginning of the road, or the bottom of a mountain, and we can picture our destination clearly, glittering far away and out of our reach.

But that viewpoint is problematic because it causes many to feel discouraged because they are not seeing the results they want in the moment.

They get impatient, because success, perfection, proficiency might not be coming fast enough.

And what’s even more problematic is that the culture we live in has now (more than ever) conditioned people to want instant results — everything seems to be competing for your limited attention.

So people don’t take the time anymore to learn one thing, stick with it, and master it. Because the moment they feel they’re not getting some desired results, they quit.

But what would happen if we adjusted our viewpoint just a bit: instead of focusing so much on an end goal, why don’t we try to turn our attention to the process?

It Would Reduce Distractions.

Let’s face it, when we know we have to deliver results, there is pressure.

As a result, you might be steamed to cut corners, not follow your plan, and risk what you shouldn’t.

But when you focus on the process, you eliminate the noise of external factors. And automatically, there is less pressure.

Because it is not about winning or losing, it’s about gaining mastery.

And so, you are not disturbed by things external, because it’s not really about satisfying the external factors but rather about conquering yourself.

You’d Start to Enjoy the work.

When you are focused on the process you are present and enjoying it more fully. You are engaged, learning faster, and gaining experience.

Success is really about that. It’s the process, not an end goal. I can’t stress that enough. In fact, ask anyone who has accomplished something of significant importance and they’ll tell you the same thing.

It Would Build Confidence.

You’d worry less about the future because you would know that you’ll be fine regardless of the outcome of any given situation or event.

You’d become free to get out of your comfort zone and take necessary risks.

And being unattached to a specific outcome means you wouldn’t be needy or get upset when things don’t go as you had hoped.

Losses wouldn’t hurt as much.

Losses are part of trading. There’s no escaping that. But people are very bad at taking losses. They take it as a blow to their ego when, in fact, they should view it as a learning experience.

I think it’s a result of this goal-oriented mindset. Anything that doesn’t look like your goal, close or far, becomes a disappointment – and this triggers doubts and insecurities.

But when you approach trading with a process-oriented mindset, you’re also getting used to taking losses. You’re learning to see them as a necessity, a part of the process, rather than a disappointment.

When you’re process oriented, you understand and accept that you cannot be profitable all the time.

You know that there will be days and months where you will reap losses.

The process-oriented mindset hence guards you against worrying. Because you know that you’re in for the long haul, and over enough time, over enough trades, your profitable trades should amply make up for the short-term losses.

Mistakes help you learn and grow. But when you are focused on a specific desired result, you are less willing to experiment and take necessary risks that, in the worst case, would result in another learning experience and, in the best case, may just propel you to a better outcome than the one you were actually aiming for.

Even if there’s nothing to learn in the moment, a process-oriented approach would still change your relationship with experience. You wouldn’t feel afflicted by events and circumstances anymore. Because again: You’re in for the long run.

Trading mastery requires constant learning, engagement, and deliberate practice, often with no immediate rewards, nothing to show but losses.

If you read all the success stories, you’ll see that a process-oriented approach, alongside patience, perseverance, and perspective are indispensable qualities to have.

Which reminds me of something: When I first became interested in the practice of meditation, I went on many retreats and have studied with many teachers in different traditions – Vipassana, Zen, and Dzogchen.

While studying Zen, I have done so under the guidance of Zen master Peter Levitt on Salt Spring Island in BC, Canada. On Sesshins (a period of intensive Zazen meditation in a Zen monastery), Peter would always remind us that “Practice is circular.”

Meaning, there’s no place you arrive at. The practice leads to perfection, but perfection shouldn’t be the end goal. The end goal should be the practice.

It is with meditation as it is with trading: If we look at our path as a circular one, a line without beginning or end, then we can learn to shift or focus away from the “final destination” at the end of the road and towards the gently curving slope of the absolute present moment. 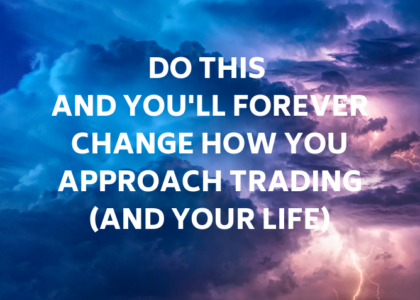 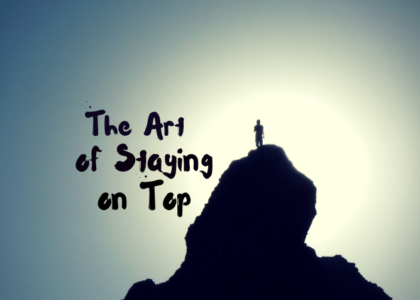