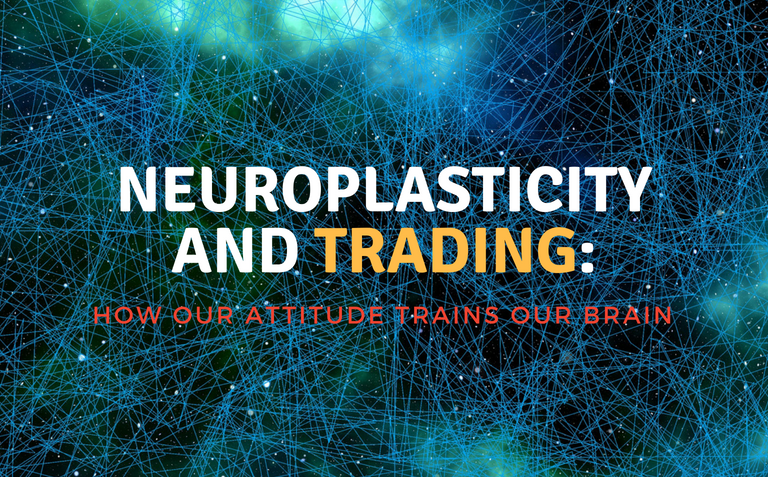 Neuroscience is the scientific study of the nervous system (how it develops, its structure and activity), including the brain, the spinal cord, and the networks of nerve cells called “neurons,” and their influence on consciousness, behavior, and cognitive functions.

[Tweet “Neuroplasticity and trading: How our attitude trains our brain”]

I have been truly fascinated by it after reading a very interesting book called The Brain That Changes Itself which plunges into the extensive neuroscience research that has been made over the past two decades.

The brain – once largely thought of as immutable and unchangeable after a certain age – is, in fact, a dynamic organ

Once and for all, this research proves that the brain – once largely thought of as immutable and unchangeable after a certain age – is, in fact, a dynamic organ that changes constantly throughout the course of our lives, as we gain new knowledge and experiences.

This ability to change is referred to as neuroplasticity. Derived from the words “neuron” (nerve cells in the brain linked by synapses) and “plasticity” (the capacity to be shaped, moulded, or altered), neuroplasticity is the brain’s potential to create neural pathways and to reorganize itself according to how it’s being used – or not being used.

Areas of the brain that you use often are reinforced as they become bigger and stronger, while parts that are used less frequently become smaller and less effective.

For instance, every time you feel annoyed and frustrated with losses, the neural networks and the areas of the brain responsible for the experience are reinforced, and the structures that produce the experience of being “calm and cool-headed” slowly fall by the wayside.

Neurons that fire together wire together, strengthening neural pathways that establish our habitual thoughts, behaviors, and reactive patterns, which then fortifies those same neural networks. This is why it can be difficult to feel better after long periods of stress, depression, etc..

By the way you trade….. you are in essence training your mind in that kind of behavior.

What does this have to do with trading?

Everything! The areas and structures of the brain that are active in cognitive functions (all aspects of reasoning, thinking, evaluating, judging, remembering, and feeling) are active when we trade. Therefore, the mental processes that take place during this activity (including your thoughts, judgments, emotions, and attitudes) are reinforced.

So, how you trade (whether you act impulsively, let your losers go out of hand, cut your winners short, take trades outside of your system) you are in essence training your mind in that kind of behavior.

It’s insidious…. I know. And this is not new stuff. People have known this for thousands of years, with the Buddha saying:

The mind is everything. What you think, you become.

We are what we repeatedly do. Excellence then is not an act but a habit.

It’s cool that science is now confirming those claims.

But it also shows just how serious psychology is — your attitudes, judgments, and inner dialogue.

So, if you really want to make lasting changes in the way you trade, thereby improving your performance, then, you have to get into the habit of being mindful of how you think and act, in or out of the markets, so as not to fall in long-established neural patterns. Essentially, these are tiny votes for the kind of person you want to be — one who reliably acts in his own best interests in the markets or the opposite of that.